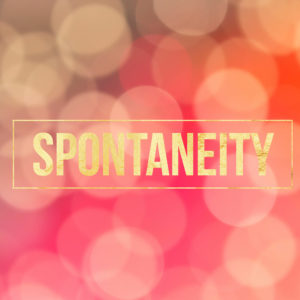 How often do you allow yourself to follow your intuition, to be spontaneous, and act upon your impulses straight away – rather than letting your logical mind kick in and think about all the reasons why and why not, you could or could not do something (let alone the shoulds or should nots).

By following our intuition, by allowing ourselves to be spontaneous is freeing – yes it can be scary yet at the same time it’s exhilarating as we allow ourselves to trust, to have faith in something bigger than ourselves. Intuition is often described as the whisperings of our soul and is one of the ways in which we can receive divine guidance.

By stepping into the unknown allows us to grow by stepping outside of our comfort zone. How often when we take a leap of faith are we actually putting ourselves in any danger? And by taking that first step it allows us to keep taking those steps that hitherto had been scary or stopped us from achieving our potential.

It’s all about taking small steps towards our desired outcome or goal – as I would say how do you eat an elephant? One mouthful at a time!!! (Obviously not literally – just a dramatic visualisation of how to tackle a large project or anything that feels overwhelming…)

Spontaneity is in the front of my mind as I did something very spontaneous this week and acted on my intuition straight away – no prevarication, no procrastination just action. And yes it was a little bit scary, yet also thrilling at the same time!

So what was the spontaneous action I hear you cry?! I just knew when I woke up on Monday morning that I needed to run a retreat this coming weekend. I had had no thoughts or plans of doing so previously. I just knew that I had to do it. So I posted about it on Facebook! Awesome! Total trust, total action. So if you are feeling spontaneous and would like to come and join me this weekend let me know…